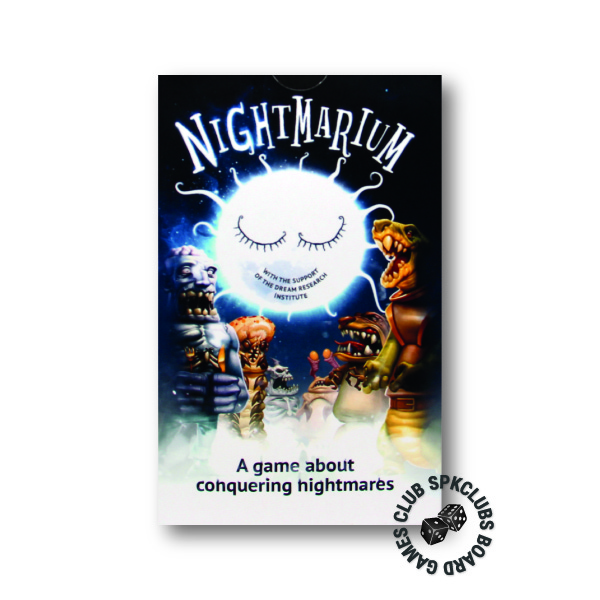 A game about building nightmares so terrifying you’ll see half of them in your dreams afterwards. You have cards representing Night Terrors, and the more of them you combine in the right order, the more monsters will come to life, and the more horrifying they become. Create monsters that will make your opponents gasp in horror. Nourish them with your own fear and make them stronger. Only then will you achieve victory and become the Master of Terror!

Each Night Terror is also associated with one of four Legions of Horror: Necromunculi, Constricti, Mansters, or Chimeridae. A Terror's legion is indicated by the color of the card's background: blue stands for Necromunculi, brown for Constricti, green for Chimeridae, and red for Mansters. A creature can be made up of any Night Terrors, but players are better off weaving Creatures out of cards that all belong to the same legion.

The game continues until one of the players completes five Creatures—this player immediately becomes the winner.

During your turn you perform two actions, after which the next person to your left takes their his? turn. You can select any pair of actions out of three possibilities (you can also perform the same action twice).

As soon as you complete a Creature (by adding a head to torso), perform all of its abilities top to bottom, starting with the Creature's head, proceeding with its torso, and ending with its legs. Abilities are activated one at a time in a very specific order. You cannot refuse to perform the abilities.If the completed Creature is comprised of Night Terrors of the same legion (in other words, if all three cards that make up the Creature have the same background color), each of your opponents must discard one card of that legion from their hands before its abilities can be performed. If your opponent does not have an appropriate card, they must discard any two cards.